The bobbins are doffed automatically by a bobbin - changer at the roving frames and hangs the full bobbins up into the rail in front of them.
The trains are driven automatically to the storage area.
The storage is able to store the loaded trains with different yarn qualities. Different qualities should have different colors of bobbin tubes for better identification.
If a ring spinning machine needs full bobbins, a button at the ring - frame is pushed and a train with full bobbins is automatically driven to the ring spinning frame.
The control system makes sure that the train with the right yarn quality is sent to the spinning frame. Inside the creel the train can be moved easily forward and backward from the operator to the place where full bobbins are needed. 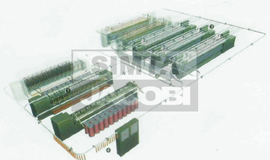 If all bobbins are changed, the train is driven back to the storage area automatically by pushing a button While the train with un-cleaned tubes is waiting for the next doffing the tubes will be cleaned automatically by a bobbin cleaning machine.

After finishing the cleaning, the train can be released and called from the roving frame automatically.
A computer system controls via monitor drive motors as well as electric point switches and shows what happens in production.

So a Fully - Automatic system is very flexible, nearly complete-automatic and each roving frame can feed every ring spinning frame.